The XOS modeling framework provides a foundation for building systems like CORD, but it is just a tool used to define a set of core models. It is these core models that provide a coherent interface for configuring, controlling, and applying policies to an operational system. This gives operators a way to specify and reason about the system's behavior, while allowing for a wide range of implementation choices for the underlying software components.

The XOS core starts with the Service model, which represents all functionality that can be on-boarded into an XOS-managed system. This model is designed to meet two requirements. The first is to be implementation-agnostic, supporting both server-based implementations (e.g., legacy VNFs running in VMs and micro-services running in containers) and switch-based implementations (e.g., SDN control applications that install flow rules into white-box switches). The second is to be multi-tenant, supporting isolated and virtualized instances that can be created on behalf of both trusted and untrusted tenants.

To realize these two requirements, the Service model builds upon two other models—Slices and ServiceInstances—as shown in the figure below. Specifically, a Service is bound to one or more Slices, each of which represents a distributed resource container in which the Service runs. This resource container, in turn, consists of a scalable set of Instances (VMs or containers) and a set of Networks that interconnect those VMs and containers. Similarly, a Service is bound to one or more ServiceInstances, each of which represents the virtualized partition of the service allocated to some tenant. 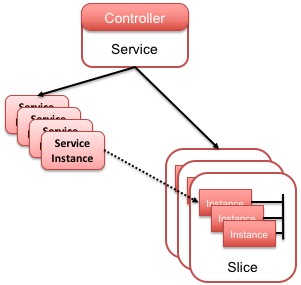 Slices model the compute and network resources used to implement a service. By creating and provisioning a Slice, the Service acquires the resources it needs to run the VNF image or the SDN control application that defines its behavior. Services are often bound to a single Slice, but multiple Slices are supported for Services implemented as a collection of micro-services that scales independently.

M-CORD’s vSGW Service is a fourth example, one that is worth calling out because it does not fully utilize the degrees-of-freedom that the three models provide. vSGW is representative of many legacy VNFs in that it requires only one Slice that consists of a single VM (i.e., it does not necessarily leverage the Slice’s ability to scale across multiple compute Instances). And because the VNF was not designed to support multiple tenant contexts, there is no value in creating ServiceInstances (i.e., there is only Service-wide configuration). There is no harm in creating a ServiceInstance, representing the context in which all subscribers use the vSGW service, but doing so is not necessary since there is no need to control vSGW on a per-subscriber basis.

The following figure illustrates an example service graph configured into CORD, along with an example collection of service chains. It does not show the related Slices.

ServiceDependencies effectively define a template for how ServiceInterfaceLinks are implemented. For example, the ServiceDependency connecting some Service A (the subscriber_service) to some Service B (the provider_service) might indicate that they communicate in the data plane using one of the private networks associated with Service B. In general, this dependency is parameterized by a connect_method that defines how the two services are interconnected in the underlying network data plane. The design is general enough to interconnect two server-based services, two switch-based services, or a server-based and a switch-based service pair. This makes it possible to construct a service graph without regard to how the underlying services are implemented.

The XOS core models are defined by a set of xproto specifications. They are defined in their full detail in the source code (see core.xproto). The following summarizes these core models—along with the key relationships (bindings) among them—in words.

The above models comprise the core Service abstraction of XOS, but there are additional models in the data model that provide additional features. For example, there are models for initiating Backup and Restore and models for controlling the appearance of the XOS GUI. Please see core.xproto and/or separate documentation on these features for more information.