This section gives a brief overview of lifecycle management in CORD, illustrating the role XOS plays in operationalizing a system built from a collection of disaggregated services. 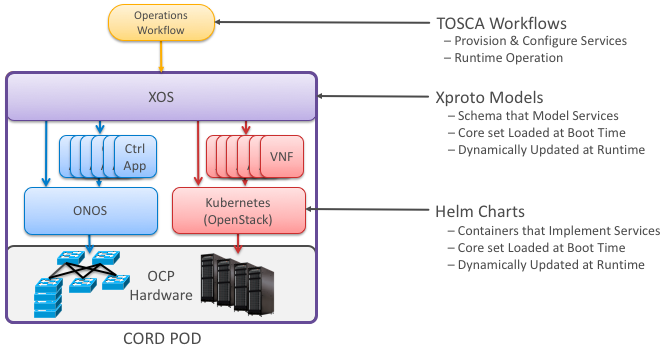 As depicted in this diagram, CORD is built from a collection of SDN Control Apps running on ONOS, plus a collection of VNFs running in OpenStack VMs and/or Kubernetes containers. Operationalizing these components involves the following three layers:

The resulting system is dynamic. Bringing up new services involves deploying new helm charts and loading new models into XOS, which in turn triggers an upgrade and restart of the TOSCA engine. Upgrading an existing service is similar: Kubernetes incrermentally rolls out the containers that implement the service (and rollbacks them back if necessarily), and XOS migrates from the old model to the new model (and supports both old and new APIs during the transition period).